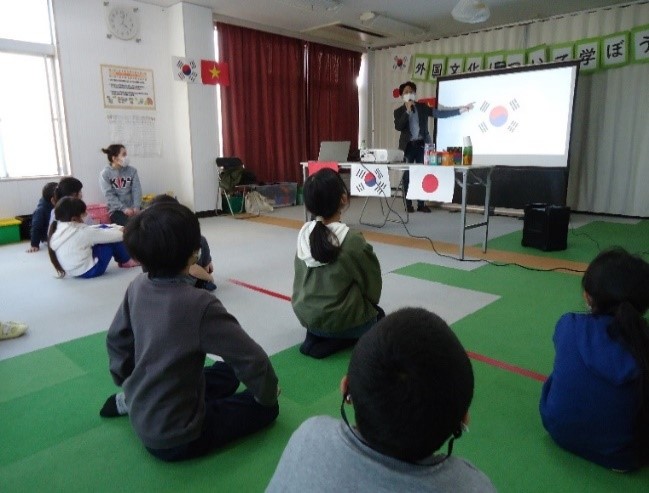 FUTABA International Center held “Tabunka Hirometai” on November 2021. In this program, which was held to grow international understandings between children, those who have foreign roots visited children’s center in Kobe city and made introductions of their home countries and regions. This time we sent 14 lecturers (from 8 countries and regions) to 7 children’s centers in Kobe city. The lectures consisted of international students, those who were raising children or those who ran companies.

Before visiting children’s centers, we had a lecture called “A lecture to become Tabunka Hirometai”, where lectures leant how they can make presentations to children better. For example, it is important not to use difficult vocabulary. Another example is that Furigana (Hiragana) should be added on every Kanji so that children can read it. Also, we advised to lectures that children would be interested in the presentations if there are some plays for children, greetings in lecturers’ languages, pictures or movies in the presentations. Since there were lectures who have visited children’s centers in previous projects, we asked them to share their experiences. They explained what went well and what did not go well based on the PPT slides they actually used for others’ reference. Besides, we shared feedbacks from children’s centers in the previous project as well. We compared what the lectures felt and what staff members at children’s centers thought to see if there were any differences and something that lectures can improve.

There have been more and more children’s centers who join this project, from which we understand that many people are getting interested in understanding various cultures. Besides, children also enjoy the program so much. For example, there are sometimes children who have foreign roots in children’s centers and they are so excited if lectures are from the same countries with them. An example we have heard was that a child who has Chinese roots played “rock, paper, scissors” so happily in front of other children together with lectures. Since this project has been working well to develop good relationships between people while understanding and respecting each other, we will continue to hold this project.